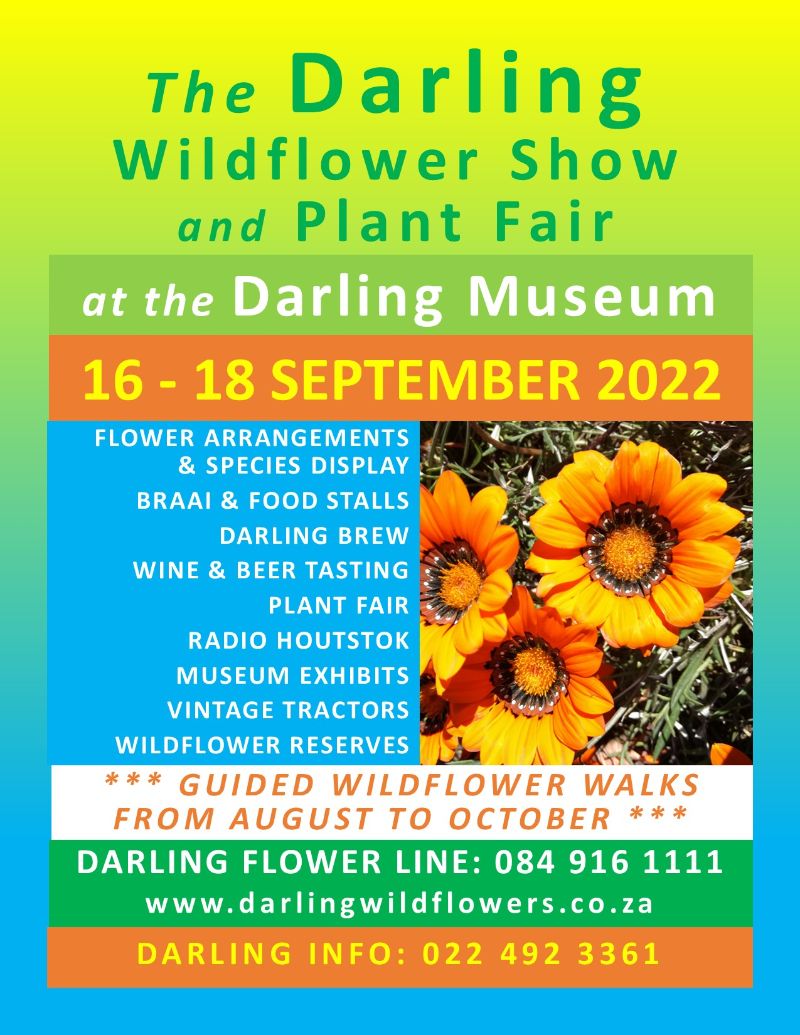 Since the founding of the Darling Wildflower Society in 1915, the third weekend of September has traditionally been accepted as the best moment in spring to create a local wildflower show, to share with the world this bounty of nature. The town and district of Darling, like many other places up the Southern African West Coast, has become synonymous with the miraculous appearance of beautiful wildflowers every spring. Come rain or shine, somewhere during September there gradually appears an extended patchwork blanket of beautiful wildflowers in the veld. This annual natural occurrence has rightly become world renowned.

This year, the Darling Wildflower Show & Plant Fair will be presented at the Darling Museum, a centralized, one-stop flower viewing opportunity, with the bonus of a vibrant outside market organized by Darling Brew. Most of the local wine estates will also be present, and as usual, a delicious selection of braaivleis will be provided. Safe parking will be available nearby on the grounds of the NG Kerk.

Additionally, the popular West Coast Radio Houtstok, will be our media partner for the event, broadcasting their usual programmes and uplifting music playlists from the flower show venue. It sounds like it’s going to be great fun for everyone.

This annual village event takes place a mere stone’s throw away from Cape Town, and it is understandable that young and old look forward to their annual outing to Darling with keen anticipation.

The South African artist Nicolaas Maritz, a Darling inhabitant since 1991, is the designer for this year’s show. Maritz is an established multimedia artist, and his artistic practice ranges from annual exhibitions of paintings, prints and sculpture, to the illustration of children’s and other books, as well as digital and video art. His latest illustrated book, RainBeast, published in by David Philip in Cape Town, has been awarded a 2021 Silver Pendoring Award.

Maritz, an ex-chairperson of the Darling Wildflower Society, has designed a number of wildflower shows. His ideas for this year’s show took shape gradually and was based on the concept of unbundling the components of the traditional flower show, and sensitively inserting aspects alongside the existing displays at the Darling Museum.

If the notion of a Wildflower Society indicates a scientific leaning, then this society’s involvement with establishing two municipal flower reserves, and the trailblazing achievement (in cooperation with CREW) of establishing an herbarium of local plant species (over 2000 and counting), is proof thereof. However, the notion of a traditional flower show points to a more cultural activity.

The layout of this year’s show represents a journey through both the history of Darling, as can be seen in the fascinating displays of the museum, and a condensed landscaped display of the respective natural flora habitats encountered in the Darling area. From the plant variety of the Renosterveld (inland lowland fynbos), to the habitat of the local Granite Hills, and via the wetland Vlei area to the Sandveld (sandy area leading towards the ocean), ultimately to the Strandveld (sandy beach habitat).

A particular show tradition are the specimen tables. Here a systematic display of the season’s flowering species and other interesting plants can be viewed from up close; each plant accompanied by its colloquial name/s and taxonomic Latin description.

The Darling Wildflower Show started out in about 1905 as a competition for flower arrangements, in what was then the Town Hall, now the Darling Museum. As a gesture towards the cultural importance of wildflower shows and their important historical narrative, highlighted by the enthusiastic volunteerism which makes it possible, the designer was keen to update the traditional flower arrangement section. A fresh and contemporary display of flowers will be on show. Expect some surprises!

An important add-on to the traditional flower show is our new Plant Fair. A selection of plant nurseries from all over the Western Cape will be offering indigenous and waterwise plants for keen gardeners, but also here and there, some interesting and rare specimens for the specialized plant collector. This will be a great opportunity of getting hold of those elusive indigenous plants you simply can’t find anywhere else.

And somewhere in the landscaped display the mythical Florasaurus darlingii will be perched, somewhat hidden. Maritz created this fictitious saurus sculpture for one of his previous show designs, and it proved to be very popular, but a bigger, better, and friendlier Florasaurus will preside over this year’s optimistic show.

We hope you enjoy the show!

Darling is a progressive small town with a good infrastructure and everything necessary to cover your daily needs.